A Top Ten Title for One Maryland One Book 2020

"It’s nuanced, profound, murky, morally complex, truly uncomfortable, infuriating—I am so sorry, I need to call it brave. . . . I’m still out of breath, processing, needing to discuss it—so please, everyone hurry up and read it.” – Marta Bausells, ​Lit Hub
​
"Singular, gutting  . . .  perhaps the most important book of the season.” – Adrienne Westenfeld, ​Esquire

​“Vanasco immediately makes you wonder how we can take so much about sexual assault for granted, how we will accept lines about women asking for it and women’s insistence that it only happened this one time. But the book has – and achieves – a higher ambition than being an astute study in sexual consent." – Lisa Levy, Times Literary Supplement

“Jeannie Vanasco muddles through the silt of her thoughts to create a language for something we don’t talk about.” – Nikki Shaner-Bradford, ​The Paris Review

“Vanasco’s book makes space for emotional responses to sexual assault other than rage, sobs, and fear.” – Camille Bromley, The Believer

​“It’s about violence and forgiveness, about friendship and the unwanted title of victim, about digging deeper and deeper to seek answers — from yourself and from your bogeyman.” – Maya Salam, ​The New York Times Book Review

“Adds a different dimension to the #MeToo conversation—one more intimate, insidious, and full of improbable grace. . . . Read it; talk about it." – Erin Kodicek, Amazon Book Review

​“Thought-provoking, unmooring, and haunting . . . an interrogation into what it means both to be raped and to rape someone, how this act marks both the victim and the aggressor, and how powerful it can be for someone who has been raped to reclaim their narrative, and write their own story.” – Kristin Iversen, Nylon

"It’s a remarkably nuanced account of the complicated and confusing emotions that surface when your rapist is someone you knew and trusted.” – Erica Schwiegershausen, New York's The Cut

"Utterly brilliant . . . some of the most thought-provoking and intense reading I’ve done in a long time.” – Rebecca Hussey, ​Book Riot

"A cuttingly funny meta-meditation on her own pain in the context of #MeToo.” – ​O, the Oprah Magazine

​“An urgent, critical, and courageous book that confronts our understanding of survival, power, and shame.” – Melissa Faliveno, Bitch

​“Part of what the book is about, in a more subtle way, is how important it is to speak about these oft-silenced experiences that cause so many to feel ashamed, scared, and alone.” – Ilana Masad, NPR

​“I have never read a book as experimental, brave, and complicated as Things We Didn’t Talk About When I Was a Girl.” – Katie Smith, Barrelhouse

​“The lingering impression of Jeannie Vanasco’s remarkable memoir is the vertiginous experience of lingering itself.” – Powell's Books

​“This fiercely written, sobering account of actions that alter lives forever is recommended for students of sociology, gender studies, and psychology, as well as general readers wishing to learn more about the effects of sexual assault and rape.” –  Meghan Dowell, ​Library Journal

​“'Vanasco gets at so many of the gray areas in our conversations about rape and the rehabilitation of its perpetrators. If some traumas don't fit into neat little narratives, then the pleasure of reading Vanasco is in knowing that messiness is OK, that there's no right way to handle such betrayals.” – Maris Kreizman, Pacific Standard

​“A firecracker of a book — a hot, burning account of her own sexual assault by a close friend and her endeavor, decades later, to talk to him about what happened . . . Vanasco expertly dissects the nuances of sexual assault, especially at the hands of someone you know and love.” – Cristina Mari Arreola, ​Bustle

​“A memoir that thoughtfully illustrates the lasting impact of trauma.” – ​TIME

​“Despite the weight of this book, despite the painful subject matter, it is Vanasco’s generosity and openness that left me in quiet awe. Vanasco obfuscates nothing, not even self-criticism or doubt or complexity.” – Joy Clark, ​The Arkansas International

​“In the craft and beauty of her writing, she makes herself vulnerable so that readers can see all aspects of the crime and her ensuing survival.” – Lorraine Berry, Rewire.News

“The book ultimately accomplishes the impressive goal of both telling a compelling narrative and creating a larger sphere around that narrative where its larger themes and structures can be pondered and discussed.” – Tobias Carroll, CrimeReads

​“Vanasco wisely doesn’t pretend to be writing a catch-all model for resolution or restorative justice or healing either—having a safe, civil conversation with an abuser is not an option for many. By exploring the complexities of her story, she emphasizes the highly dedicated work required for repair.” – Rebekah Kirkman, ​Bmore Art

​“We’re presented with the contradictions and confusion inherent in an attempt to play out a situation for which there is no script beyond, as Vanasco puts it, 'boy rapes girl, girl never talks to boy again.' This engagement with scriptlessness is, for me, the power of Vanasco’s book.” – Christina McCausland, Columbia Journal

​“It’s an unflinching look at the lingering effects of sexual assault and a gripping, timely, and thought-provoking read.” – Emily Calkins, ​425 Magazine
​
​“The brave and beautiful book is an interrogation, of self, of memory, and of Mark. Vanasco is a deep thinker, and a relentless questioner, who uses the incident with Mark to explore other sexual violence in her life and in the lives of her students.” – Catherine Capellaro, Isthmus

“I can’t stress enough the necessity of this book.” – Chloe Laws, ​FGRLS Club

"Adds new layers to the larger discussions about sexual violence. Vanasco’s story challenges readers to question their own interactions and reject ideas of what victimhood should look like." – ​​Lia Assimakopoulos, ​Washington City Paper

"[It explores] questions of trauma, guilt, and the legacy of pain. It’s a work that uses some bold structural decisions to ask big thematic questions, and frequently takes the reader to revelatory places." – ​Vol. 1 Brooklyn

"Jeannie Vanasco’s book is one of the most stunning I’ve read this year." – ​Marion Winik, ​Baltimore Fishbowl

"Thoughtful and nuanced, Things We Didn’t Talk About When I Was a Girl is a measured response to a horrific act that broadens and deepens the debate around sexual violence." – ​​Waterstones

​“It is a powerful and timely book, and one that is sure to stay with you long after you’ve finished it.” – ​BookBub

​“In this harrowing memoir . . . Vanasco delves into her friendship with Mark before and after the assault, exploring the effects of sexual assault while attempting to answer the unanswerable: Why do good people do bad things?” – ​Best Products

“Our cultural discussion of rape is so deeply marked by silence. Enough with the silence. Enough. Vanasco has given us a bridge.” – Megan Stielstra, author of ​The Wrong Way to Save Your Life

“Jeannie Vanasco has written exactly the book we need right now . . . I wish everyone in this country would read it.” – Melissa Febos, author of ​Abandon Me

“This is a brilliant book, an astonishingly fierce inquiry into the places language won't go.” – Emily Geminder, author of ​Dead Girls

“There is so much power in these pages: in the vulnerability she shows in seeking answers, in the deftness with which she builds a narrative where there was once only a mess of questions and silence.” – Elissa Washuta, author of ​My Body Is a Book of Rules

“Things We Didn't Talk About When I Was a Girl cuts through the silence of deep betrayal, gives contour to the aching space between forgiveness and absolution, and offers a living testament to the endless wreckage of sexual assault.” – Amy Jo Burns, author of ​Cinderland

“Searching, searing, and sacred, Things We Didn't Talk About When I Was a Girl is the cleansing flame we have been waiting for.” – Lisa Locascio, author of ​Open Me

“Vanasco reveals the boundaries of your thoughts and feelings. Then she takes you beyond.” – YZ Chin, author of ​Though I Get Home

“Her wildly courageous decision to confront her rapist, question him, meet with him, and then invite her readers into her processing of that experience is, frankly, stunning.” – Angela Pelster, author of ​Limber

“Part memoir, part interview, Things We Didn’t Talk About When I Was a Girl interrogates the terms of betrayal, the limits of redemption, asking us how can we forgive when we never truly forget?” – Tim Taranto, author of ​Ars Botanica

“This is a book of nuance, one that in clean, careful writing circles and loops in order to find the linear text . . . This book is important and timely, but it’s also deeply personal and affecting.” – Jamie Thomas, Women and Children First Bookstore

“Things We Didn't Talk About When I Was a Girl ​is more than a memoir of sexual assault, more than an exploration of guilt or how good people can do bad things: it is a creative experiment to show exactly how women reckon with these experiences.” – Johanna Albrecht, McIntyre’s Books

“This book is as brave and important as they come. It concerns the right here and now while simultaneously serving as a primer for future generations. Jeannie Vanasco has initiated a different and vitally important dialogue concerning gender politics.” – Javier Ramirez, The Book Table

“We are witness to Vanasco thinking through her own internalized misogyny, the ways both minute and large in which rape culture has persuaded and distorted the thinking of both rapist and victim, a conversation between two experiences of an event that adds such a deep level of nuance to this conversation that nearly every page of my copy is dog-eared.” – Kelsey O'Rourke, Literati Bookstore

"This book is a powerful, fascinating and necessary contribution to the #metoo conversation, and I can’t recommend it highly enough." – Wayne Giacalone, RoscoeBooks

“This book is aching and so important.” – Mary Cotton, Newtonville Books

“One of the bravest, most honest, and most unusual memoirs I've read . . . a riveting reading experience, and an incredibly important work." – Jill O., Powell's

“Without losing focus on the issue, this disarming memoir becomes about so much more as Vanasco considers cultural and gender expectations, and even the writing process . . . . if Vanasco can have this difficult conversation, then the rest of us can too." – Holly, Elliot Bay Book Company

“Jeannie Vanasco’s Things We Didn't Talk About When I Was a Girl is at once difficult to read and difficult to put down. It is the kind of book that should be required reading for men." – Jeff Waxman, WORD Bookstore, for Lit Hub
​Also available in the UK–
in bookstores and online at Foyles, Waterstones, Blackwell's, and Amazon. 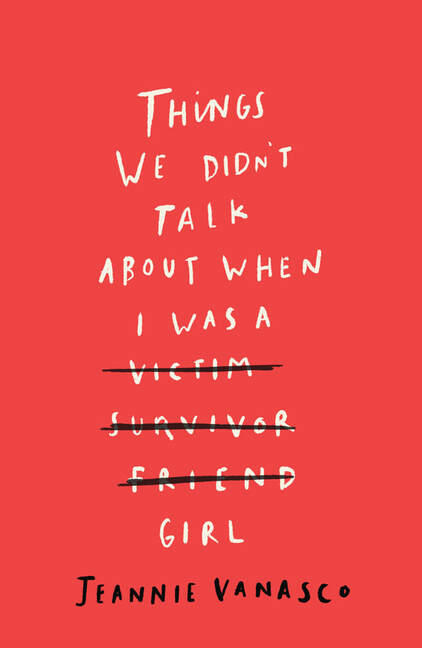