PRAISE FOR THE GLASS EYE 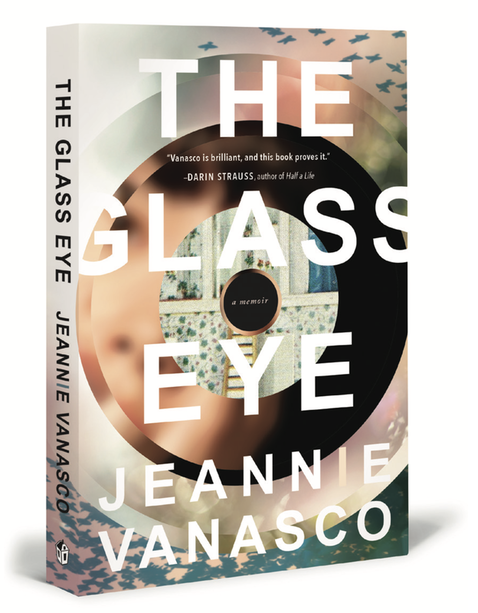 “Hypnotic . . . a haunting exploration of perception, memory, and the complexities of grief.” —​ Marya Hornbacher, ​The New York Times Book Review

“An intense and unforgettable memoir, as fascinating for its artistry as for its subject matter. . . . Lyric, haunted, smart and tortured, this is an obsessive love letter to a dead father as well as a singular work of literature.” —​ Julia Kastner, Shelf Awareness

“The language cuts quick to the heart of Vanasco’s hurt; readers will immediately fall into the rhythm of her unrelenting inner dialogue. . . . Vanasco's candor, curiosity, and commitment to human understanding are not to be missed.” —​ Courtney Eathorne, Booklist, starred review

“A deceptively spare life story that sneaks up and surprises you with its sudden fecundity and power.” —​ Kirkus Reviews

“In this powerful and ruminative memoir, Vanasco explores the years following her father’s death as her grief transforms into an increasing obsession with her half-sister Jeanne, who died before Vanasco was born. . . . An illuminating manual for understanding grief and the strange places it leads.” —​ Publishers Weekly

“This powerful, haunting memoir . . . shows in an incredibly intimate way the methods we use to cope with loss, disappointment, and grief, and how we can try and make our way out of the darkness and into a place of recovery.” —​ Kristin Iversen, NYLON

“She writes vividly of the exposed-nerve pain of losing a parent at such a tumultuous age.” —​ Andrew Schenker, Los Angeles Review of Books

“ . . . beautiful and complex, but also a great example of what is possible when a very skilled storyteller starts manipulating form in a way that allows her to go deeper into the subject, in part by commenting openly on all the things she might not remember.” —​ Melissa Oliveira, Hippocampus
​
“Jeannie Vanasco’s The Glass Eye is the beautiful and multilayered journey of a writer paying tribute to her father, while also discovering herself.” —​ E. Ce Miller, ​Bustle

“In this stunning, quite meta memoir, Vanasco attempts to come to terms with many things: Her beloved father's death, the name she shares with a dead half-sister she never met, and her own crescendoing mental illness. All the while, she talks the reader through her obsessive, meticulous writing process as she tries to finish the memoir she promised her dying father she'd write for him.” —​​ Entertainment Weekly

“Excellent memoirs can resonate for various reasons—the singularity of the experience, the artfulness of the prose, the honesty of the voice. Jeannie Vanasco’s book hits for the cycle.” —​ David Giffels, Literary Hub

“The Glass Eye by Jeannie Vanasco is an evocative and heartbreaking exploration of family bonds, mental illness, and memory.” —​ Dahlia Balcazar, Bitch

“Her story isn’t always comfortable for the reader, but it is captivating.” —​ Stephanie Topacio Long, ​Bustle

“Jeannie Vanasco’s debut memoir is a portrait of a daughter’s grief for her father with a twist: It’s also a wildly innovative tale of the author’s own mental breakdown after his death.” —​ New York

“This book has a blazing lyricism to it, one that’s bound to be a trademark of Vanasco’s limber mind. . . . The Glass Eye—spare, deep, and kaleidoscopic—will make you want to read the first page again after you finish the last.” —​ Amy Jo Burns, Ploughshares

“Vanasco explores the intricacies of the human psyche with stunning poignancy.” —​ Newsweek

​“Vanasco’s memoir is valuable reading for anyone who has ever tried to create something. Artists of all stripes will see that it is, in fact, Vanasco’s tireless self-awareness of her own role (as memoirist, as careful practitioner of her craft) that allows The Glass Eye to function as a fruitful addition to the genre.” —​ ​The Arkansas International

“The form is a beautiful, effective illumination of Vanasco’s process in working through her grief and mental illness, but also in constructing the book. . . . it invites the reader in to examine, with Vanasco, the nuances of life as a human being searching for meaning, for connections to the people we love, and the moments that stay with us, for whatever reason, long after they’ve passed into memory.” —​ Rachel Wooley, Atticus Review

“Unpacking the meanings of her name, her identity, and how to live without her father makes for a fascinating, poignant story that will speak to many readers.” —​ Lorraine Berry, Signature

“Vanasco writes movingly about mourning for a beloved parent, bipolar disorder and searching for the dead sister she never knew — who non-coincidentally shared her name.” —​ ​Baltimore Sun

“Her memoir reads like a documentary unfolding in the mind’s eye, a camera pointing at the subsections of her life—Dad, Mom, mental illness, death, life, love—to craft a complete story of grief and loss.” —​ Nada Sewidan, ​Vanguard

“Jeannie Vanasco’s The Glass Eye [is] a remarkable and peculiar memoir/meta-memoir. ... Vanasco uses her preoccupation with metaphor and with deciphering meaning to bring her readers into a mind in chaos.” —​ Emery Ross, ​The Seattle Review of Books

“There’s a bit of a battle among the staff at the Women & Children First Bookstore: They can’t decide who gets to put Jeannie Vanasco’s memoir The Glass Eye as their staff pick—too many of them want to recommend it.” —​ Tracy Mumford, Minnesota Public Radio

“Jeannie Vanasco’s The Glass Eye is memoir as it ought to be, but so rarely is: beautiful and painfully raw, but also restrained and lyrical. Vanasco is brilliant, and this book proves it.” — Darin Strauss, author of Half a Life

“In The Glass Eye, Jeannie Vanasco shows us why rules should be broken: because an elegy that pulses with immediacy, a fragment that is inextricable from a whole, a book that comments on its own writing can smash what you think you know into pieces, and expose a piece of truth so bright it might be your own broken heart, handed back to you.” — Melissa Febos, author of Abandon Me

“In The Glass Eye, the writer asks, in prose that mesmerizes with geometric precision, how we can orient ourselves to the world when our only compass is grief. What begins as an experience of profound loss becomes an obsession, the fierce intensity of which propels readers through this breathtaking book.” — Lacy Johnson, author of The Other Side

“With The Glass Eye, Jeannie Vanasco has produced a debut of incisive vision. In prose as vivid as a novel and as chiseled as poetry, Vanasco shows the reader that memoir can entail an unexpected, ultimately liberating reckoning.” — John Keene, author of Counternarratives

“I loved every word of The Glass Eye. It’s a story about stories, a story about the impossibility of ever telling the whole story. It’s a detective story that interprets itself as it goes, raising the stakes and thickening the plot. It’s also a love story, a ghost story, a story about the most important man who ever lived: the narrator’s dad. Her literal reason for being. But it’s also a story that I can’t help but feel was written just for me.” — Daniel Raeburn, author of Vessels

“The Glass Eye is heartbreaking and harrowing and at times painfully intimate, but it ends on a note of tentative closure: Vanasco has found a loving partner, moved to the Baltimore area to teach writing, and fulfilled her promise to her father, splendidly.” — Kelsey Osgood, author of How to Disappear Completely

“This heartbreaking memoir is so smart, so tightly constructed, and so moving that it broke me—both formally and emotionally.” — Michael Kimball, author of ​Big Ray

“This is memoir at its best. The prose is powerful and often breathtaking—it’ll make your heart break, it might make you cry, and you’ll probably even laugh a few times. This is an elegy fierce and lyrical and raw, like none I’ve read before.” — Sarah Malley, Newtonville Books

“Vanasco has this unique and brilliant way of structuring her narrative that leaves the reader bewildered and enlightened at the same time . . . I am not one for memoirs, but this is a rare gem that highlights something so sacred as a daughter's relationship to her father.” — Jason Kennedy, Boswell Book Company

“The Glass Eye is a literary tour de force, a hurricane of language and emotions that fly off the page, a testament to love and loss and how the lexicon of grief, though universal, is always a personal discourse.” — Rachel Kaplan, Avid Bookshop

“I have never read anything quite like The Glass Eye . . .  The writing is fierce and engaging, and I truly couldn't put it down.” — Courtney Flynn, Trident Booksellers & Cafe

​“Somewhere between grief and madness lies The Glass Eye―an unfettered dive into a brilliant, unraveling mind. Vanasco's memoir is visceral, poignant, and ultimately an affirmation of the healing power of literature and the resilience of the human soul. Astounding.” — Keaton Patterson, Brazos Bookstore

“Jeannie is a gifted writer with a unique voice and the story of her family’s mysteries, including her discovery of a dead half-sister with her same name, and, of course, her father’s glass eye, are compelling and haunting. The Glass Eye is reminiscent of other memoirs of grief and madness, but that makes this enchanting book sound darker than it really is. Vanasco's humor and intelligence shine through her journey of loss.” — Sarah Goddin, Quail Ridge Books

“Jeannie Vanasco grew up in the shadow of her dead half-sister, Jeanne. In her deftly written memoir, she examines how this experience, along with her father’s death and a difficult-to-diagnose mental illness, left her haunted and obsessed. You too will be transfixed by Vanasco’s strange, remarkable story.”— Renee P., Powell's Books

“The Glass Eye is absolutely brilliant! ... Jeannie’s ability to express the complexities of the human mind in such a beautiful and honest way made her mania appear almost rational. For me, this memoir transcends beyond a daughter’s love and loss of her cherished father.  One of the best memoirs I've read in a long time.” — Stephanie Coleman, Tattered Cover Book Store

“Read this book. It will change you.” — Katherine M., Powell's Books